What is a Terminal Degree? 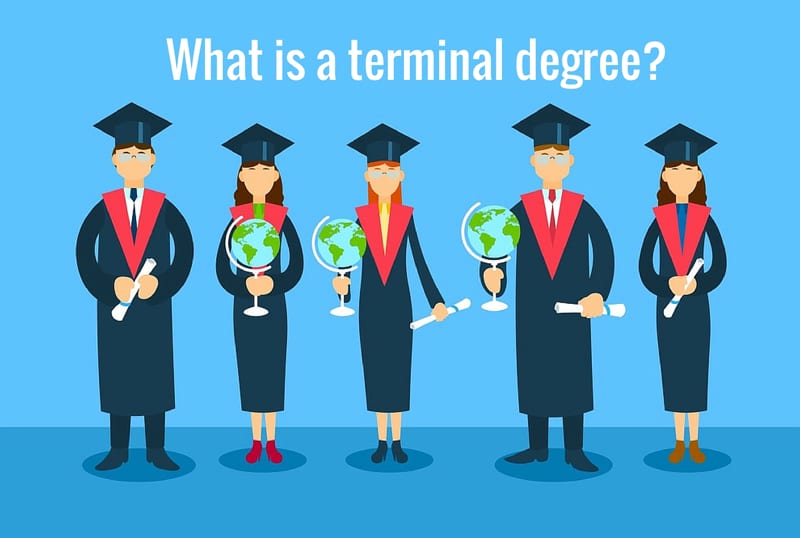 Scouting out university and college programs is a process that many people find themselves engaged in. Whether you have recently graduated high school, or you’re considering a return to the academic environment after many years away, new terminology has greeted you. During your research, you’ve probably heard the phrase “terminal degree,” so you are now wondering what that is and how it affects you.

What is a Terminal Degree?

In virtually any field, you need a certain degree to obtain a position. Some jobs require a bachelor’s degree and others require that you attend graduate school. If you are in a terminal degree program, you do not have to procure further degrees to obtain a position in the desired field. Essentially, the degree that you have is the highest in the field.

Not needing another degree is different from lacking an ability to obtain one. A degree may be terminal, but you can still pursue other educational opportunities if you wish. For example, a master of fine arts is considered a terminal degree. You may go on to pursue a career as a college instructor after obtaining it. However, you may also have an interest in literature and want to earn a doctoral degree in the field. Your terminal degree will not prevent you from doing so.

If you know that you want a particular career that requires a certain terminal degree, then you should start the program as soon as possible. Failure to do so could mean that you spend more time in college or graduate school than is necessary. However, most schools do not require that you declare a major right away; speak with your academic counselor to learn how much time you have to do so, particularly if you are interested in a terminal degree program. Also, many of these degrees are offered in graduate school only, so you still may have some time.

People choose terminal degree programs for a variety of reasons. One of them is the fact that such a degree can lead more directly to a job. Instead of taking a lower-level position while you are working on another degree, you can immediately go to that higher job, which might earn you more money. A terminal degree can also help you to save money since you probably won’t dabble in as many different college programs.

How Can I Earn a Terminal Degree?

Before you can start planning out the course requirements for your terminal degree, you must find out what the field requires. Some people just assume that they know, or they base their decisions on hearsay. Talking to someone in the field can help, but you have to remember that requirements can change. The requirements when they entered the field may have changed substantially in the present. Speaking with an academic adviser in the department is a smart way to learn what you need.

Earning high grades and comprehending the material in all of your courses is important; however, you want to pay particular attention to the classes for your major or specific field of study. When you apply for internships and jobs, the interview board may very well pay more attention to your grade point average in those areas than your overall grades. The exact grades that are in needed, both in general and in your specific field, will vary depending upon the program requirements.

In many terminal degree programs, you have to assemble a final project, thesis or dissertation to present to a committee. In order to graduate with the degree, you must successfully accomplish this task. Find out what the requirements are for this element early on in the program. You will likely have to pick a specific topic in your field to focus on during your course of study, and you will also likely need to work with an adviser.

Speaking with your professors about their areas of interests and gauging how your rapport is with various individuals can help you to develop a plan for this important final project.

If you are trying to decide between obtaining a terminal and a non-terminal degree, you have to do what makes the most sense for your career goals. Non-terminal degrees do not necessarily prevent you from obtaining a job; however, you may not have the same perks and benefits that you would if you pursued the terminal degree. Taking a variety of factors into consideration when making this decision helps to point you in the right direction.

While the exact time commitment will vary by program, a terminal degree usually takes longer to complete than a non-terminal degree. For example, a person with a master of arts in English does not have a terminal degree, but he or she can finish the program within two years. Then, this individual could work as an adjunct instructor. A terminal degree in English would require a doctoral program, which could take upwards of seven years. However, at the end of the program, the individual would have the opportunity to pursue a full-time job with a salary and benefits that adjuncts generally do not get.

When it comes to university programs, the cost is usually a major deciding factor. The non-terminal degree in and of itself tends to cost less, especially since the program is shorter. However, people may find themselves pursuing more degrees in the future because their terminal degree has not taken them far enough. They may find themselves unhappy with their career path. On top of that, the terminal degree can earn them more money in the long term. Since this type of degree takes longer to earn, people need to consider if they can survive for that period without a regular salary.

Both terminal and non-terminal degrees have cost benefits; the one to choose depends on upon personal financial circumstances to a large degree.

Many terminal degree programs do involve procuring a doctoral degree, which often involves years of study and some unpaid work. Therefore, individuals who enter into these programs want to make sure that they are 100 percent certain that this field is the one for them. Unless they have the money to experiment with a different academic program, pursuing a terminal degree without complete dedication is a risky move. People who are less committed to their path may want to look into a non-terminal degree program instead.