What is the Difference Between College and University? 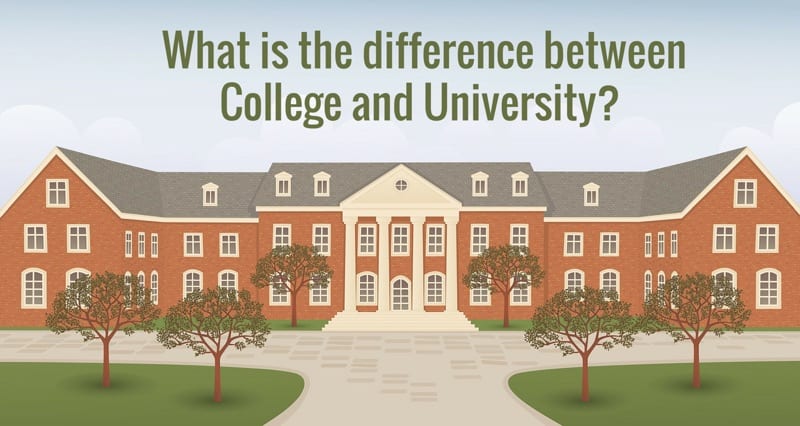 It’s college tour time and parents and students are exploring all the options for the next step in their lives. As they tour, they will begin to wonder, what are the differences between a college and university? Many people think that the term college means a private school and that a university is state funded. Others believe that you receive a better education at a university as opposed to a college. In actuality, the differences between a college vs. university can be harder than you think to define.

A smaller institution that usually offers undergraduate degrees is considered a college. There are even community college and junior colleges that provide students with two-year degrees. Most four-year colleges offer bachelor’s degrees with some also offering associate degrees.

In contrast, an institution that offers both undergraduate and graduate degrees is considered a university. They offer undergraduate programs that will lead a student towards a master’s degree or a doctorate. They also can have a medical or law school for those pursuing professional degrees in those fields. Sometimes, they even have these great programs that allow you to get both your undergraduate and your graduate degree in a shorter amount of time. Universities will also offer a more diverse curriculum and programs because they have a much larger number of enrolled students.

During the Middle English period, between 1250 CE and 1300 CE, the term university appeared and is older than the word college which did not appear for another 50 to 150 years. They both have Latin origins – universities (guild, corporation, society) and Collegium (club, community, society).

How does a university receive its classification?

Before a college can receive a university status, it must meet a few requirements for at least five years:

Organization – It must have a graduate studies program and its associated programs plus they must be separate from the undergraduate program and the entire organization itself. It must also have staff that has the primary responsibility for administering the graduate and professional programs.​

Resources – It must be able to financially support its graduate and professional programs and have the facilities and equipment required to exhibit the level of work needed in both.​

Accreditation – It must be accredited and depending on the state, possibly licensed and incorporated within the state.​

Universities have evolved into large, widespread institutions with different academic programs that serve a broad range of students throughout the United States and around the world.​

On occasion, there is a blurry line between a college and a university; this can happen when a college offers graduate programs in a few areas. St. Joseph’s College in New York offers education, creative writing, and graduate business programs as does the College of William & Mary. These institutions prefer to remain a college because of tradition. They have been a college for so long; it would be upsetting to student and alumni to change their name now. Mt saw this. Union College in Ohio who considered changing their name to the University of Mt. Union but abandoned the idea among protest from the alumni.

Depending on what country you are in, the difference between college and university are how the terms are used differently. In the United States, the two terms are used interchangeably, and both mean a school at the postsecondary level. Otherwise, the term university usually means a large institution that offers graduate and doctorate programs while college means undergraduate degrees or associate degrees.

In the United Kingdom, colleges are schools found with a university and they do not award degrees or are a part of the program that the university used to award a degree. Colleges can even be something other than a learning institution and can be related to the facilities or accommodations in a university. Sometimes, the term college will refer to a secondary education institution where students can earn advanced qualifications.

In Canada, the term college will usually refer to vocational, artistic, technical and scientific third state education. There is also a term in Canada of University college which means a college that is not recognized as being completely independent the same way as a university is.

In Australia, the term college means secondary education and is not commonly used for specific vocational schools or schools inside a university. The term faculty is more often used instead of college at the third level of education.

Each of the graduate and professional schools are run independently, but they are still part of the same university. They keep their admissions offices and teaching and research faculty separate, and they do not offer any undergraduate programs.

Which Should I Choose?

Remember, the name of the school is less important than whether the school is a good fit for you personally. Decide what you want from your college experience and then choose a college or university that fits that ideal.