The History of College Rankings

The first college rankings were developed in the U.S. due to a preoccupation with the origins of famous or prominent leaders in society. Initial college rankings were solely outcome-based, focused on the number of eminent men who attended, graduated from, or taught at specific institutions.

Published by Englishman, Alick Maclean, who was studying eminent men of the day.
Compiled list of universities and ranked them by how many prominent men attended.
Looked at nationality, birthplace, family, and university attended.
The first academic origins study ever published.

Published by British physician and writer, Havelock Ellis, studying nature vs. nurture.
Compiled list of universities and ranked them by how many geniuses attended.
Neither Alick nor Ellis suggested that such ranking be used to rank school quality.

Compiled Biographies on 1,000 prominent scientists, including 269 new men from the first edition.
Looked at where they attended and which institutions they taught at post-graduation.
Ranked institutions based on how many scientists were associated with them.
The first published academic quality ranking of American universities.
Top Five leading institutions listed: Harvard, Chicago, Columbia, Hopkins, and Yale.

The only time the federal government has attempted to rank college quality.
AAU request so institutions could select the best undergrads for their graduate programs.
AAU believed impartial rankings would be more widely accepted.
A draft was leaked to newspapers creating a backlash from colleges who were ranked lowest.
President Taft issued an executive order prohibiting the study’s official release.
President Wilson also refused to release the study when he entered office in 1913.

1931 – American Journal of Sociology: The Comparative Rank of the American States

Published by geographer, Stephen Visher, studying geographical origins of notable scientists.
Visher noticed an unusually high number of notable scientist being born in New England states.
Compiled ranking of 17 institutions by the ratio of young scientist in total student enrollment.
Looked at scientists listed in American Men of Science and Who’s Who in America.
Suggested that these universities were better able to inspire and stimulate students.

Ranked universities based on the number of alumni listed in Who’s Who in America.

Reputational rankings are based on peer-review opinion. These grew in popularity as the importance of institution reputation replaced that of the prominence of students they produced. Reputational rankings have become the predominant method for producing academic quality rankings.

Published by Raymond Hughes, chemistry professor at Miami University in Ohio.
Compiled list of graduate schools and departments ranked on a 1 to 5 scale of quality.
Hughes ask for faculty opinion instead of using popular outcome-based methodologies.
Looked at 20 fields of study: 19 liberal arts disciplines and 1 in professional education.
Faculty rated instructors from 36 institutions who taught in their same discipline.
The first list ranking a department’s quality based solely on reputation by selected raters.

Published by Hughes, now serving as the council’s chairman.
Conducted a study on graduate school quality with a wider scope and improved methodologies.
National societies provide list of 100 scholars in each field to be surveyed for study.
Looked at 35 disciplines and gathered opinions from a more diverse field of respondents.
Compiled alphabetical list of departments receiving an adequate rating by at least 50% of raters.
The study helped refine the reputational methodology, but it was not a ranking.

Published in the appendix by UPenn humanities professor, Hayward Keniston.
Only focused on comprehensive American research universities comparable to UPenn.
Marks the beginning of the end of outcome rankings and the rise of reputational rankings.
Relied solely on the opinions of 24 department chairpersons at each of 25 top universities.
Compiled list of 15 strongest departments in their discipline at the 25 universities.
Aggregated data into institution-wide rankings, becoming the first determined by reputation.

1966 – The Cartter Report: Assessment of Quality in Graduate Education

Published by American Council on Education vice president, Allan Cartter.
Polled 4,000 student scholars and department chairpersons in 29 disciplines at 106 institutions.
Resulted in the largest and most diverse body of opinions ever published.
Looked at two criteria: quality of graduate faculty and quality of the doctoral training program.
Rated each department on a 1 to 5 scale of quality, resulting in a 2 decimal ranking system.
4.01+ were distinguished, 3.01+ were strong, and 2.01+ were adequate to good.
Most comprehensive methodology to date, receiving approval of higher education officials.
The national press praised study, 26,000 copies sold, and reputational rankings became the norm.

Published by Kenneth Roose and Charles Andersen for the American Council on Education.
Rounded ratings to a one decimal system, resulting in more ties, but scores not published.
Expanded Cartter Report to 36 disciplines at 130 institutions with 6, 100 raters surveyed.
Did not receive the same popular reception as Cartter Report and was criticized by academics.

1981 – The Assessment of Research-Doctorate Programs in the U.S.

Published by the National Academy of Sciences with the National Research Council.
Rated 2,699 programs at 228 institutions and provided detailed data about programs.
Largest academic quality ranking project ever, but not presented in easy to understand terms.
First major reputational study to include non-reputational measures, including program size, graduate characteristics, library size, research support, and publication records.

1995 – Research-Doctorate Programs in the United States: Continuity and Change

Published by the National Research Council using same Assessment data with increased scope.
Ranked 41 disciplines at 274 institutions resulting in data on 3,634 programs.
Listed institutions in rank order for each discipline, but it did not identify its numerical rank.
Different quantitative measures reported, but reputational measures received most attention.

With the rise of reputational rankings in graduate studies, an interest in ranking undergraduate programs began to increase as more high school students entered college.

1967 – The Gourman Report by Jack Gourman

Began evaluating colleges in 1955, but started publishing results in 1967 (thru 1997).
Focused on undergraduate and graduate rankings using unknown, questionable methodology.
Score calculated on 10 factors of administration policy, not reputation or student success.
Critics claim the hundredth of a point difference between schools is statistically impossible.
Used by economists interested in college quality based on alumni earnings and student choice.

Published first undergraduate reputational ranking, revolutionizing academic quality rankings
Researchers believed most high school students were not influenced by rankings until now.
Before then, only published in educational journals and difficult to understand by laymen.
Compiled by editors and highly circulated, it became the most widely read ranking in history.

1988 – Marked the beginning of the annual publishing of rankings and a book length college guide, America’s Best Colleges, which was more in-depth.

1999 – Began standardizing data to align with accepted statistical practices. This allowed outcomes to reflect size of differences between schools in each component rather than just their respective ranks.

They ranked schools based on their value, amount of quality per dollar of tuition spent.
Determined how much college should cost based on incoming test scores, faculty quality, library resources, graduation rates, academic success, and alumni careers.

With Richard Veddger, an economist at the Center for College Affordability and Productivity.
In response to rankings monopolized by U.S. News, it’s largely based on academic outcomes.
Ranked 569 undergraduate institutions based on quality of education and student achievement.
Analyzed 7 million student evaluations on courses and instructors from RateMyProfessors.com.
Calculated how many school alumni listed as notable people in Who’s Who in America.
Top 5 schools listed in 2008: Princeton, Caltech, Harvard, Swarthmore, and Williams

Pioneered the field of global comparison rankings.
Developed to compare China’s universities to international competitors.
Adopted by other nations for same purpose after The Economist published the report.

1995 – Reed College refused to participate in the U.S. News annual survey. Reed College openly questioned the methodology and usefulness of college rankings, even as they were ranking in the top 10 list of liberal arts colleges.
1996 – Students of Stanford University founded FUNC (Forget U.S. News Coalition) in support of Reed College’s decision to opt out. Group spread to other colleges as students argued that ranking something as complex as a college education with a single number was an oversimplification FUNC claims that rankings cause colleges to focus on numbers rather than educating students.
1997 – President of Alma College asked 480 colleges to boycott the U.S. News survey. This was in response to their own rankings survey of 158 colleges that revealed 84% of respondents admitted they were unfamiliar with some of the institutions they were asked to rate.
2005 – Since 2005, St. John’s College has not participated in any college ranking surveys. However, the school still gets listed in U.S. News and other rankings, but they are officially opposed to rankings.
2006 – A number of Canadian universities boycotted the Maclean’s University Rankings Survey.
2007 – During an annual meeting of college presidents, nearly 80 presidents pledged to not participate in the U.S. News reputational survey section, which comprises 25% of an institution’s rating. U.S. News editor Robert Morse issued a response, stating that reputational surveys were important in measuring intangible that can’t be measured through statistical data.

Princeton, Harvard, Yale, and a 3-way tie for Columbia, Stanford, and University of Chicago.

In 2013, President Obama announced a plan for the federal government to rate colleges and universities by measuring tuition, graduation rates, student debt, post-graduation earnings, and percentage of lower income students attending. This plan was abandoned in 2015 after sharp criticism from the higher education community on how these ratings would be conducted.

According to Forbes: 18 million undergraduate students will head to college in 2015, will pay an estimated $18,943 on public college tuition and fees ($42,419 for private schools). New graduates with student loan debt will owe $35,200 and overall national student debt is at all-time high of $1.2 trillion.

According to UCLA’s 49th annual survey of new college students (2014), the following factors were “very important” in influencing their final decision on where to attend college:

65% because of good academic reputation
53% because college will get them a good job
46% because financial aid was offered
45% due to the cost tuition
43% because of good reputation of social activities
18% due to rankings in national magazines
Largest U.S. college campuses based on total enrollment 2013/2014:

Who’s Who in America: Founded in 1899 by Albert Nelson Marquis and published as a comprehensive collection of biographies of prominent and noteworthy people in the U.S. The original Who’s Who was published in London in 1849 as a handbook of titled people, but only listed names and no biographies. 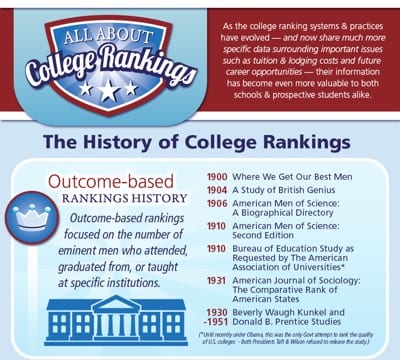